Sabero Industries is here to provide the essentials in stock and in many different mods and combinations.  We deliver a serious and useable approach as well as a more humorous and hopeful one.  We are here because KSP has many big mods but not many, if any at all, serial shareable creators.

Our first and foremost upload is none other than a simple station; space, that is.  It is completely stock and is expected to work with versions .23 and above and with any sort of modification.

As for a site description;

It was based off the stock, VAB, ship, "Space Station Core".  It was then built up to be more useable in the real KSP world.  An extensive amount of LFO was added as well as an almost crazy amount of Monopropellant.  This filled the basic service a small space station would be used for.

However KSP can't grasp the scientific possibilities that space actually offers, this station is equipped with a lab so that, depending on what you do with it, the station could be used in conjunction with scientific experiments from other craft; possibly so that a route can be planned to rendezvous and process the data created to be used more efficiently.  Possibly, with the fuel mentioned, the sayion could even allow craft not designed to return safely, return safely.

Since planning such endeavours takes time, a few trinkets of science stuff were added to give your smart kerbasses something to do.

This design features an original 'skirt', housing a connector hub and a few SAS points, In truth, this was not difficult at all.  It was simple really.  All it took was the superflat adaptors [mk1-mk2] and eight, radial, 1×1 panels.  The original basis for this station, that I mentioned above, had an inline SAS module attached directly between the adapter and the hub.  The instructions I'll give you should work with or without it.  I will test later to be 100%.  However, I do want to mention that without ont there I predict placing a docking port correctly may get more difficult.  But, it would be good for places where six pieces are connecting at a time.  The instruction don't differ either way.

Also, FYI, I did not design this to be used with docking ports connecting the sections of a station to the connector hub.  That would be a slightly, major, different process and would not work anyway.  Until KSP puts in triangle shaped pieces, maybe.

Step 1 is to make at least two or three mk2 sized sections.  Use a Connector Hub (stock) to connect them, utilizing the super flat mk1-mk2 adaptor to fit.  The adaptors should have the smaller side facing the hub and the larger side connected to the sections you created.

Step 2 is to use a 1×1 structural Panel (stock) to make the skirt.  To do this, select the 8 radial setting, and make sure you have angle snap enabled.  Focus the camera under a section. Place your cursor on the underside of the adaptor, and slide it towards the outside as far as it will go with out screwing up, heh.  To make sure you have it is at the right angle, make sure that 1 panel is facing the same direction as 1 of the connection hub's flatter sides.

Step 3 is to simply hold shift and press the D key five times to angle the panels inward so that they line up with each other.

Step 4 is to repeat the first three steps so that all of the sections look alike.  Sections that make a T shaped intersection with the rest of the station may get problematic.  Especially in areas where the station makes an X or + shape and the particular piece is going out from the middle.  If it does, try to do those ones first.

Step 5 is to be the final step.  See I didn't stop saying "is too"!  Grab another 1×1 Structural Panel (stock) and place it on the edge of one of the panels.  Make it so that both panels look flat.  Once you have it, hold down shift and press the D key six times so that the panels angle inward.  If it all worked, great!  If it all looks good repeat step five until you have finished the rest.  [Remember from step four.  If it gets problematic in those areas, do those first.]  Then, you're done!!

Word of advise, don't try to launch separate pieces into a rendezvous orbit like a real space station would be built.  The panels are designed to be inside one another.  If not, they would just bump around and break.  If they happen to be strong enough they would stop you from putting the station into place all together.

If there are ANY AT ALL questions PLEASE DO NOT HESITATE TO ASK!!!!!  I haven't payed enough attention to this curse site to see if comments are allowed but ask there for a start.  I will be creating a designated email for this account soon.  But for now, "It's 9:57, Local Time, and good night, Guten Nacht, Etc.!!!" 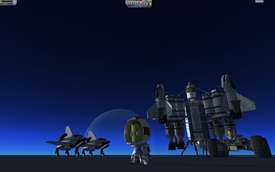 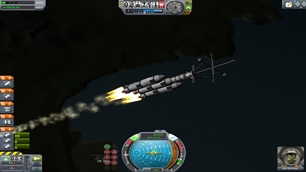 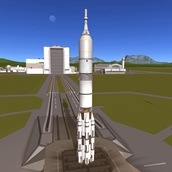