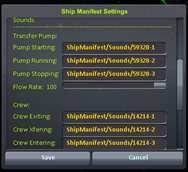 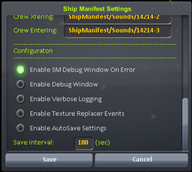 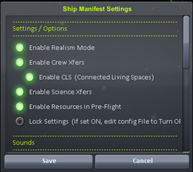 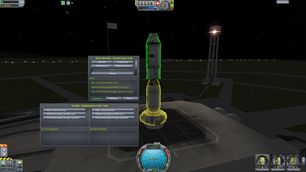 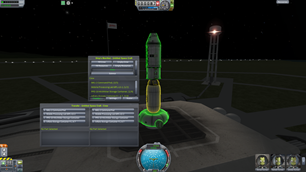 I started with Crew Manifest as a basis for this work, with great thanks to vXSovereignXv for creating Crew Manifest, and Sarbian for contributions to Crew Manifest.

I've now re-imagined it into Ship Manifest, using the same easy to navigate system that vXSovereignXv used.  It does what crew manifest does, only better, plus a whole lot more. Ship Manifest moves crew, Science and Resources around  from part to part within your ship or station.

Ship Manifest can be used alone.   There are no mod dependencies.  However, if you install the mods below, you can use them in Ship Manifest.

Version 5.2.0.0 – Release 17 Jul 2017 – Vessel to Vessel Edition
– New: Added Docked vessel to vessel Crew and Science transfers!
– New: Added Docked Vessels Control panel. View your docked vessels, Rename a vessel, and undock a vessel with a click of a button.
– New: Added option to vessel to vessel Crew transfers to limit crew xfr list to tourists only. Space tourism awaits!
– New: Added ability to create Tourists from Roster Window.
– New: Spanish localization added. Thanks to Fitiales!
– Misc: refactored vessel detection for vessel to vessel transfers, it was not behaving as exected.
– Misc: A bit of refactoring on highlighting, as it was not behaving as expected
– Misc: Increased base volume of crew movement sound files.

Version 5.1.4.2 – Release 31 May 2017 – KSP 1.3 Compatibility Edition
– Fixed: compatibility with latest DeepFreeze. Freeze action from Roster Window was failing.
– Fixed: Some localization was not complete. Added additional tags for text not caught in first pass.
– Fixed: Highlighting of parts was occurring outside the boundaries of the scroll windows.
– Misc: Cleaned up text rendering in general. Converted to consistent use of C# string interpolation across mod.
– Misc: Cleaned up some code style issues. I've been wanting to do this for a while, so KSP 1.3 was a good time to do it.
This affected the SMWrapper.cs class for modders, and may break your mod.
If you use this or reflection to access SM, some methods had capitization changes.
Ex: SM… was replaced with Sm… get… was replaced with Get… Nothing is gone, just "altered" 🙂

Version 5.1.3.2 – Release 16 Jan 2017 – KSP 1.2.2 Compatibility Edition
– New: Refactored for KSP 1.2.2
– Fixed: Enumeration error when opening or closing more than one hatch at the same time.
– Fixed: Respawn Kerbal fails. Github issue # 35.
– Fixed: Opening/closing hatches via a part's tweakable doesn't properly update the transfer windows xfer/eva buttons when CLS spaces change.
– Fixed: Fill buttons do not have tooltips. Can be confusing as to their behavior.
– Fixed: Part level fill buttons do not behave as expected by users. Should not be available in flight with realism on.
– Fixed: Roster and Settings Icons sometimes appear in flight scene. Should only be in Space Center Scene.
– Fixed: Highlighting is disabled temporarily when hatches are opened and closed.
– Fixed: Resource selection in the Manifest window is behaving erratically. Resources are disappearing in the display when multiple selections are made.
– Fixed: Vessel to vessel transfers are failing with an NRE in ShipManifest.SMVessel.UpdateDockedVessels. http://forum.kerbalspaceprogram.com/index.php?/topic/56643-121-ship-manifest-crew-science-resources-v-5131-15-nov-16/&amp;do=findComment&amp;comment=2881063
– Fixed: Sometimes crew transfers do not work.

– Fixed: Create Kerbal fails.
– Fixed: Rename Kerbal changes do not show up after change.
– Fixed: Removed Mod Button from Settings Window. Was there in error.

Version 5.1.2.0 – Release 21 Jul, 2016 – KSP 1.1.3 Optimization Edition.
– New: Added option to enable Crew Fills and Dumps Vessel Wide during Pre-Flight . Off by default. Works the same as Resource fill and dump.
– New: Refactored Part level Crew Fill and Dumps. Now shows up in the Transfer Window in Preflight when CrewPreflight setting is on, or anytime when Realism is off
– New: Significant refactoring to improve overall performance.
– Fixed: Revised erroneous tooltip messages for Renaming kerbals and enabling Profession changes. These are now enabled by default and supported by the stock game.
– Fixed: Now SM properly detects and notes changes in USI inflatable crewable modules

– Fixed: NulRef errror with DeepFreeze installed and a frozen kerbal in RosterListViewer.
– Fixed: (maybe) Window display issues during launch and stage separation, explosion of ship.
– New: SM window can now be displayed in IVA and in Map mode.
– New: Added logging to output.log. this will make the output.log more useful for troubleshooting. Captures all log entries, verbose or not.
– New: Refactored Highlighting to clean up FPS issue. Now causes significantly less impact to frame rate.
– New: Refactored Stock Crew Transfer Beahavior. When override is on, changes to KSP 1.1.3 now allow capturing transfer before it occurs.

– New: Updated code to run on KSP 1.1.3
– New: Modified screen message displays to account for changes to the object model.

1. Remove ShipManifest from your GameData Folder before installing any new version..
2. Overwrite your GameData folder with the contents of the archive.

Videos:
– Kottabos did a fine review here: www.youtube.com/watch?v=I_TNxjnW234 (Feb 28th). It was very educational for me 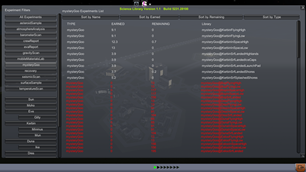